What is Warhammer Age of Sigmar Mortal Realms

Age of Sigmar Mortal Realms is a weekly partworks magazine (pieces are released with each issue to make a complete product) that contains models, paints and scenery for collecting two armies in Warhammer Age of Sigmar. The two armies are the Forces of Order Stormcast Eternals and Forces of Death Nighthaunts. 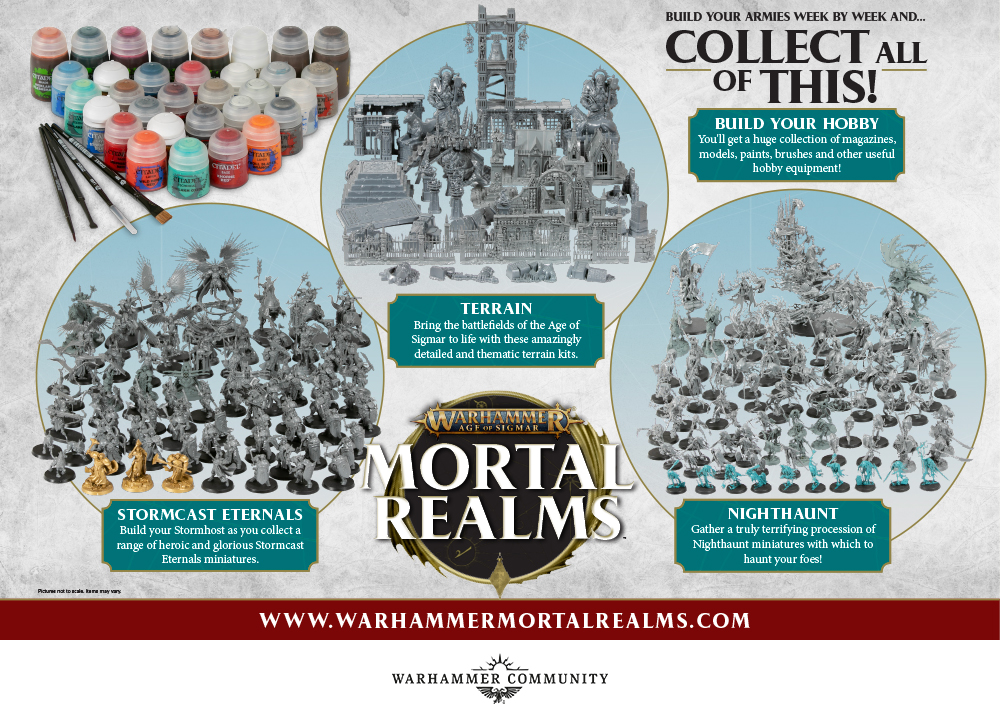 Each magazine will have lore on the forces, characters and worlds that Age of Sigmar is set in. Focusing most likely on these two forces. There will also be advice on how to paint the models of the two forces. The paints appear to be for the standard colour scheme of both factions.

However there is an exclusive unit that you will get with this series for the Stormcast Eternals, Knight-Incantor Xandria Azurebolt.

There are going to be 80 issues. With the first being released on the 8th January 2020. Which means that it should end around July 2021!

What is the Cost?

With there being 80 issues you can easily work out that in total the series would cost £634.20.

Is it worth it?

Well let’s take a quick look at the amount of money that you can save.

And that is just for the models and scenery as we have been shown the models. If you are getting exactly what is shown in the Collect all this image above then the paints and brushes would add the costs and savings as such.

Subscribing to the series during the first 4 issues will also gain you some extra freebies, worth around £36.80. Although you can only get that pair of Clippers and mouldline remover by buying the Paint and Tools set for £25. Or you could by the Essential tools for £30.50. Making the subscriber gifts a total of £61.80 – £67.30! Plus a binder for the magazines! 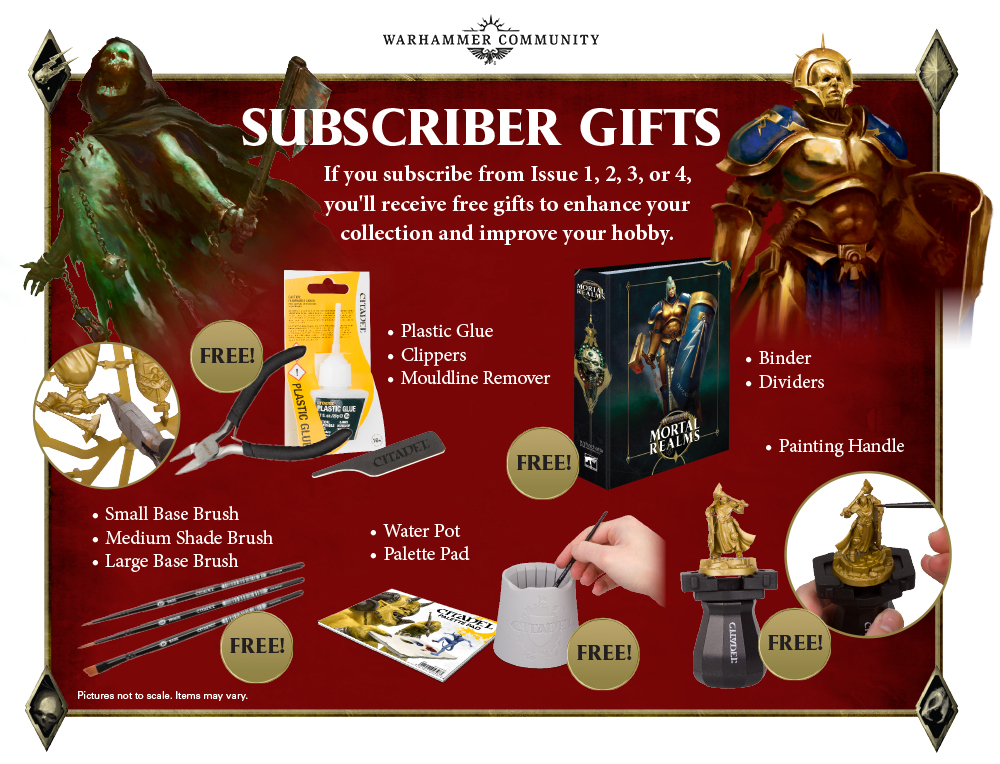 Over all it appears that for just the savings alone then it is well worth the collecting of this magazine series. But I guess as well it depends on how quickly you want to collect and start painting as well. But with everything being provided for you then there isn’t much of a rush. But it appears there are no paints or brushes until after issue 10!

Can I back order?
Like with most collections like this then you can back order if you have joined the party late for whatever reason.

You would need to get in touch either with Hachette Partworks Ltd or with the Age of Sigmar Mortal Realms Customer Service Team.

Though you will not get any of the subscriber gifts if you haven’t subscribed by around 5th-12th February. This is around when issue 5 is released and the gifts only come to those that subscribe from the first 4 issues.

Now there are several places that you can subscribe from.

By using Forbidden Planet you will save £303.65! Unfortunately however you will not gain the subscriber gifts and if you order online you will need to pay postage costs.

Or you can order via your local news agent but won’t gain the subscriber gifts or the awesome saving Forbidden Planet does.

I think that this series appears to be great for any newbie that wants to start collecting and painting or even for a veteran that just wants a saving. However if you do not want to collect either of these two armies then there isn’t much point in collecting the series.

Personally I will be giving the series a miss. Although I like the Stormcasts I am more interested in collecting the Sylvaneth, Idoneth Deepkin and Aelves. Plus with the reveal that Teclis is returning with his own army I will be saving my pennies for his army. Although my wife might want to have strong words with me about painting all of the models that I already have.

Please note that prices are estimations and are based on the prices on the Games-Workshop site.